This post is the continuation of previous Part I and Part II. 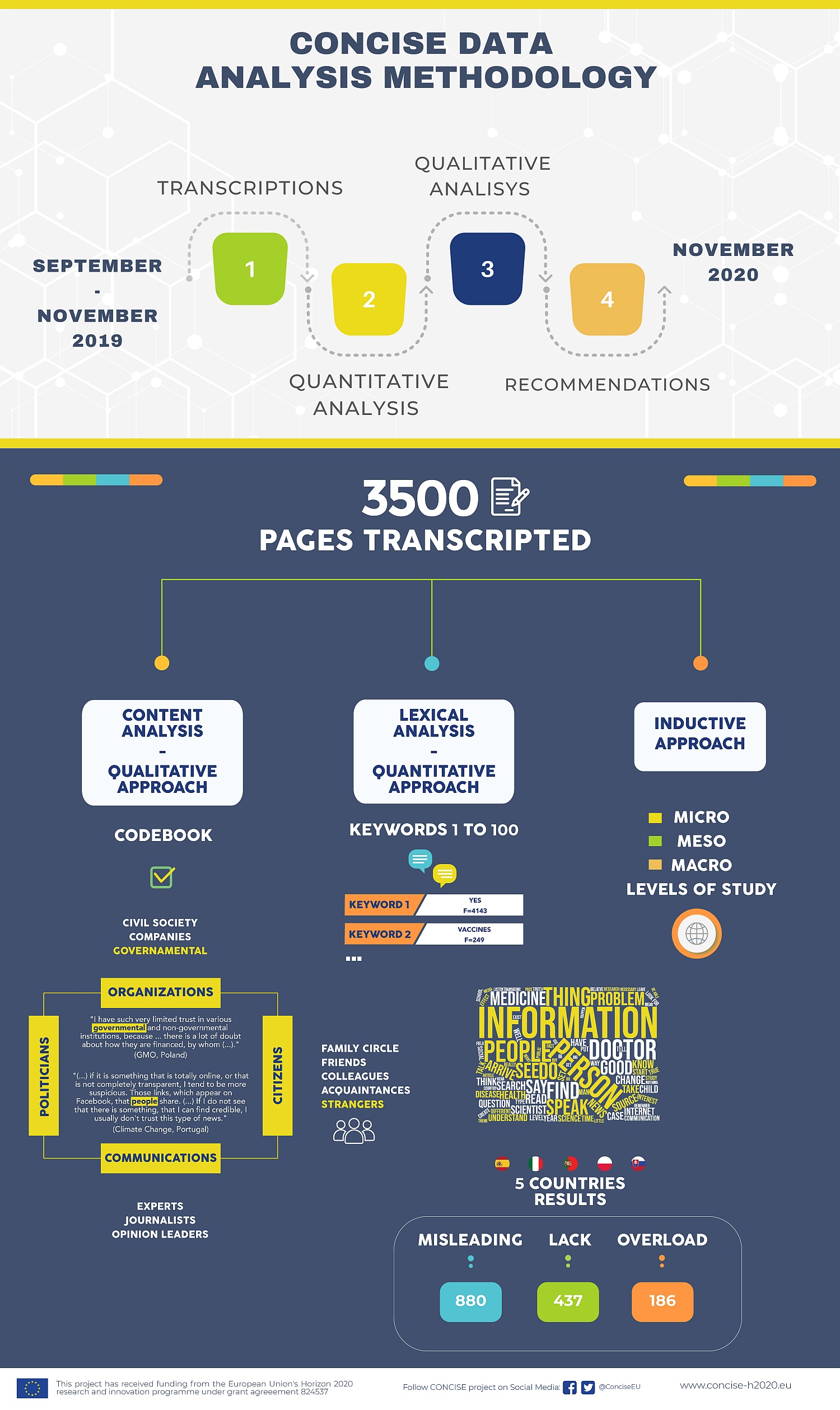 The third step, followed by CONCISE consortium to analyse the citizen discourses from a qualitative approach, was a combination of inductive and deductive research. The inductive approach consisted of three phases: a) discourse in-depth analysis, b) find patterns, and c) develop theories. Right now, we are following up with deductive research to confirm or invalidate the conclusions of the cross country studies.

1.To identify the contexts of the speeches in the country where the citizen consultation has been held

Contextual elements. To adequately interpret the citizens’ dialogues, we took into account contextual factors, such as, for example, political or electoral debates, recent regulation or governance, the dissemination through the media of some news on the issues treated, due to a newsworthy event or circumstance, or the cultural, political, economic or social contexts of the country.

We also took into account how each topic had been represented on the thematic agenda of the media. To do this, we use different press databases such as Mynews. We included two filters: a period of one year prior to the citizen consultation; and we only searched the national media. The search identified the words in quotation marks, and they could be in the headline or the body of the information: “climate change”; “vaccines”; “complementary medicine” or “alternative medicine” or “complementary therapy” or “alternative therapy”; and “genetically modified organism” or “transgenic”.

As an example, we show a selection of different frames used for each topic debated. For instance, for Climate Change the frames were: reliability and rigour of information sources; symbolic characters (politicians, celebrities, influencers); consensuses and dissensions (scientific evidence and deniers); public institutions (administration, scientists, universities, national science and technology system); activism and social movements, and political discourses (programs, political projects, neo-Malthusian). The frames proposed for vaccines were: the reliability and authority of the information sources; information amount and structure; the role of the family doctor / primary care; the role of fathers and mothers; the hoaxes about vaccines and conspiracy theories; and pharmaceutical corporations. The frames proposed for complementary and alternative therapies were: the role of YouTube channels and social networks in the dissemination of CAM; the placebo effect; word of mouth; it works for me (anecdotes); a mess of practices and products; and well-being and lifestyle. The frames used for genetically modified organisms were: the right to information on food labelling; the role of multinationals; environmental activism; the precautionary principle applied to GMOs; regulation of GMOs; food, drugs and agriculture; and organisations and activist movements against GMOs, among others.

3. To apply the different levels of analysis

4. To begin by identifying what the characteristics of the debates are

That is, how do you argue in favour of or against an idea or point of view? Or how are the arguments or positional agreements reinforced and others retorted? To do this, we locate in the debates the number of times that each of the following phrases appears. We make proposals to search for these expressions in each language. In bold type, we propose terms that we have used to identify how personal opinions were introduced with a positive or negative attitude towards the subject that was being discussed.

–To introduce a personal opinion in a positive way

I believe, I think, it seems to me, to me, it is true, I my opinion, I consider

-Has worked for me, for me

Once the conversation has been reached at the micro-level, the fragments must be selected literally (verbatims), to be able to analyse the arguments comprehensively; in relation to the rest of the participants at the same table, with the general context of the consultation, and with the social context.

Finally, each country decided to carry out the content analysis methodology in a general way, applying the previous steps on the whole corpus of study or through the debated topics, independently.